A century of idyll with the ephemeral art

A century of idyll with the ephemeral art

In Orotava –The Canary Islands, Spain- we have a special idyll with the Ephemeral Art.  Our devotional, dedicational and affectionate relationship to the works made with flowers, heather and the sand from the most important volcano of this country has over a century and a half of history. The members of the family Monteverde and del Castillo, of noble origin, were the ones who started this singular tradition with the aim of giving more devotion to the festivity of the Most Holy Corpus Christi – losing fame in the village at that time-. It was the 40’s of the 19th Century and the strokes of this story began to be written.

The Monteverde created a unique carpet of flowers at the door of their house to celebrate the passage of the Infraoctava of Corpus Christi -a religious festivity celebrated on the following Thursday after the Corpus Sunday-. They did not know that their particular Catholic faith tribute would mean a before and an after to the entire village. And from that moment, the village families -as we are known here- devise and create hundreds of carpets of petals and vegetables with religious, social and ornamental motifs to decorate the village in its great day of the Octave Orotavense, known today as Infraoctava. 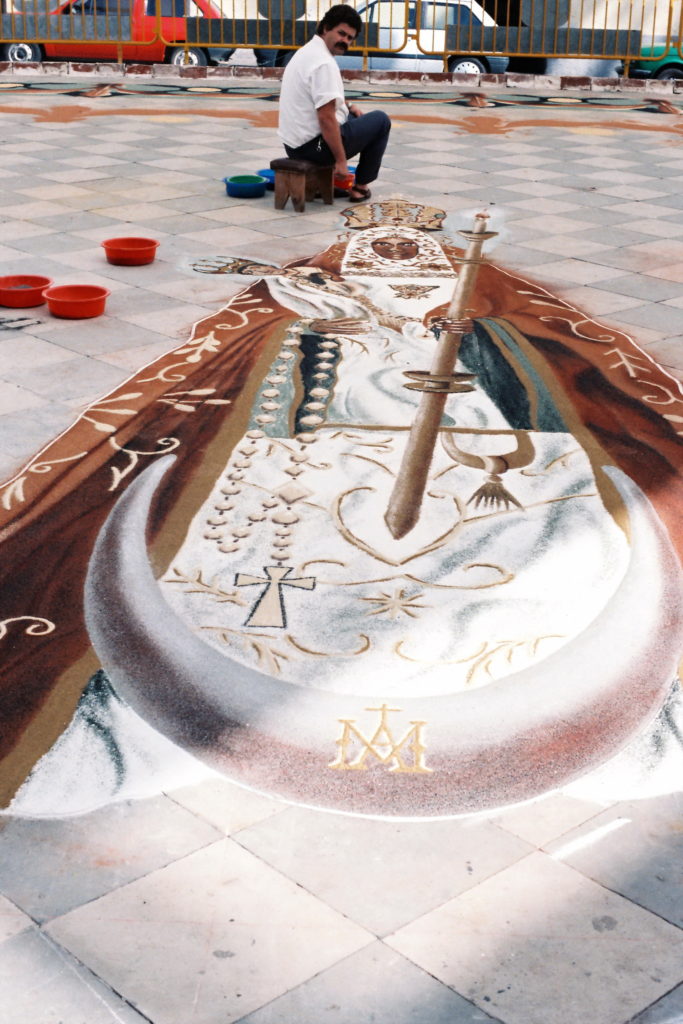 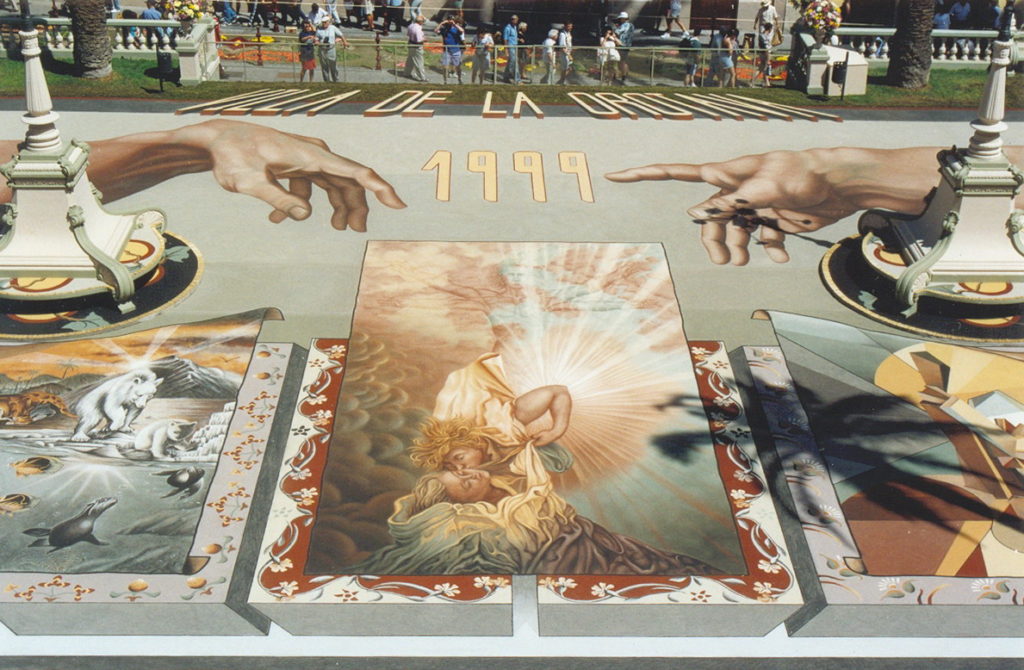 There was already art in every corner of the city, but the great leap to the heart of the Orotava was missing…

Almost 50 years later, in 1905, the first tapestry located in the 950 square metres of the Town Hall square was produced. The young Guzmán Codesido Varela and Agustín Monteverde y Lugo showed the detailed talent of the villagers on the occasion of the visit to the municipality of the sailors from the Spanish war ships Carlos V and Pelayo, commanded by the Counter admiral Lazaga. This innovative work was created with natural flowers, which in harmonious cohesion enlivened the village shield, curiously granted by King Alfonso XIII four days before.

But it was not until 1919, date on which nowadays we commemorate the centenary of the carpet in honor of the Corpus in the Town Hall square of La Orotava, when this tapestry was erected to celebrate this day and for the procession to leave its footprints on it, as a symbol of devotion, as it has always been done. Felipe Machado y Benítez de Lugo was the author, becoming then the great architect of the success and fame of The Carpets of la Orotava.

Machado became famous for his spectacular medallions, different to the classic tapestries of the Monteverde family. In the square, not only did the villager use flower petals but also other vegetable or even sea products. His tapestry was made of rice, chickpeas, beans or lentils. It was a work of great beauty and originality, but it presented two inconveniences: humidity, which used to germinate the grains and therefore had to be replaced; and the pigeons, which forced the villager to put some panels as a protective shield.

The carpet of the square has been undergoing since then a transformation process involving different materials, in which the flowers that could not withstand the previous elaboration phase this big creation requires have gradually been disappearing, since they tend to wither sooner. Among these materials there were the lime used by Norberto Perera and by Jesús Martín Raya, in 1936 and 1946 respectively, or the coloured powders of José María Perdigón and Ambrosio Díaz Alfonso.

Thus, this tapestry has eventually become a work of natural coloured sand of the Teide, whose park is a World Heritage Site. An ephemeral manufacture that not only is unique in the planet, but it also obtained the Guinness record for the biggest sand tapestry of the world in 2007.

With the passing of the years and the legacy of 11 directors, the responsibility of directing the great carpet of the Town Hall reached the hands of Domingo Jorge González Expósito, graduated in Fine Arts, in 1992. It is with him and with other highly experienced carpet designers that the group of artists and friends known today as Artearena starts to take shape. Even though the association was legally constituted in 2015, architects, riggers, artists and carpenters have joined forces during these 27 years to decorate the square Corpus after Corpus and also to make this legacy not to be forgotten and to be known beyond the village frontiers.

Ambassadors in The United States (2006 and 2009) or in Mexico (2007); hosts of visits of Government presidents or rituals of Tibetan monks (2006); messengers of the traditions in the Olympic Games of Barcelona 1992; or protagonists in the I International Congress of Ephemeral Art in 2006.

The members of Artearena -around fifteen nowadays- have tried to make a contribution to the history of these compositions of natural soil. Our works show an evolution, always with a strong religious and social character, but also at the artistic level, in order to adapt to the new times. Even though our works are born to live only for a few hours, we wish it would last beyond the limits of time and this is why this confection aims to become a Masterpiece of the Intangible Heritagle of Humanity, awarded by UNESCO.

We believe opening up to the world will make us better. 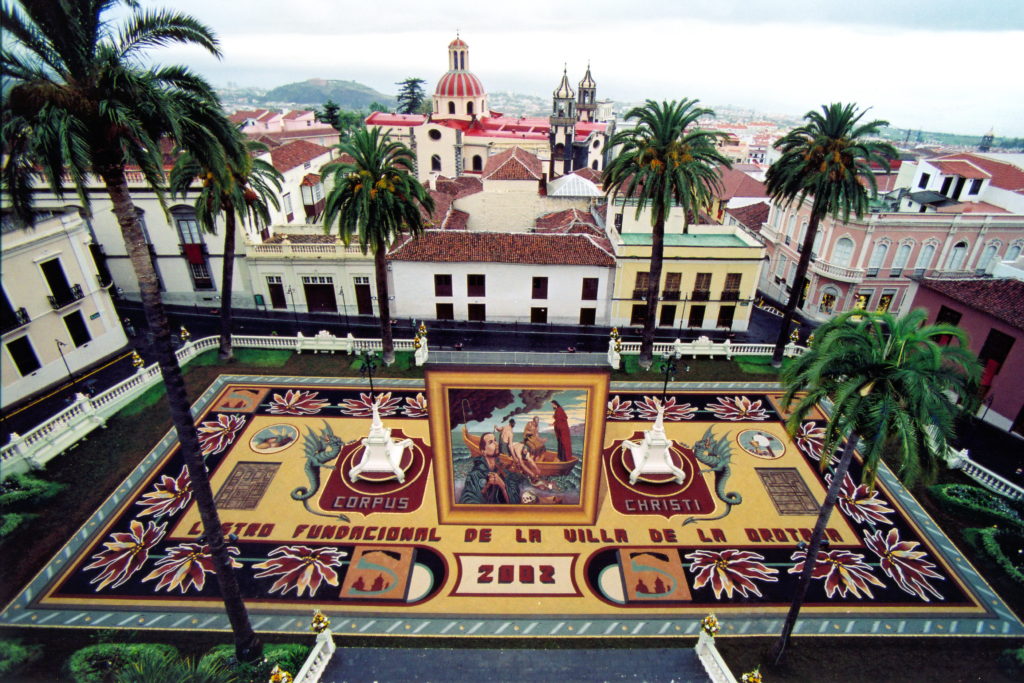